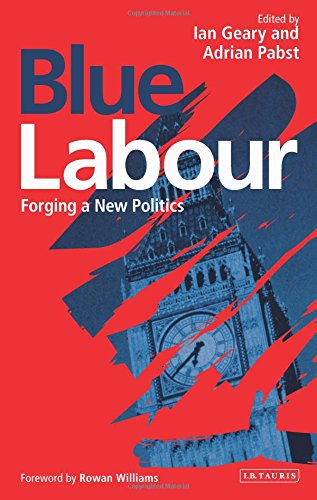 In the aftermath of the global economic crisis, and the worst recession for over seventy years, Britain has witnessed one of the most turbulent eras in politics since the Second World War. The dominant political and capitalistic system has come under close scrutiny; and the 2008 financial crash has cast serious doubt on the economic and social liberalism of both Thatcherism and Blairism. The Blue Labour movement addresses the fact that neither nationalisation nor privatisation has delivered lasting prosperity or stability. Critiquing the dominance in Britain of a social-cultural liberalism associated with the left and a free-market liberalism linked to the right, Blue Labour blends a ‘progressive’ commitment to greater economic equality with a more ‘conservative’ disposition emphasising personal loyalty, family, community and locality. Seeking to move beyond the centrist pragmatism of Blair and Cameron, this essential work speaks to the needs of diverse people and communities across the country. It is the manifesto of a vital new force in politics: one that could define the thinking of the next generation and beyond.

‘Something went horribly wrong with British politics in the 1990s. The modernisers drained the meaning out of political engagement by focusing on strategy and presentation rather than substance. As a result all British political parties are now facing mortal crisis. This book on ‘Blue Labour’ is the most thoughtful attempt yet to help Ed Miliband devise an answer to a conundrum which no twenty-first century politician has yet been able to solve.’ — Peter Oborne, Chief Political Commentator, Daily Telegraph

‘Anyone looking for an antidote to the stale and stultifying brand of liberalism which has dominated British political discourse for far too long will find a refreshing and thought-provoking alternative in the contributions to this timely volume.’ — Mark Garnett, Senior Lecturer in British Politics, Lancaster University

‘Blue Labour ably exposes the deficiencies of neo-liberalism and offers an inviting political agenda based on a “moral economy of mutual obligations”. With neo-liberalism discredited by predatory banking, and socialism by the collapse of the planned economies, the paths back to a “moral economy” are well worth exploring. They are not the property of any political party, but will be of special interest to Labour supporters trying to develop an alternative narrative to that of the free market and the centralized state.’ — Robert Skidelsky, FBA, Emeritus Professor of Political Economy, University of Warwick

‘The “Blue Labour” movement has emerged as one of the most influential and controversial innovations of the British Left in a generation. Rooted in a deep reading of Labour history and culture, it offers a compelling critique of the Blair and Brown governments and offers a potential route to renewal – revisiting the past so as better to face the challenges of the future.’ — Rafael Behr, Political Columnist, Guardian

‘Blue Labour isn’t, to me, about that rather glib little triad, Faith, Flag and Family. It’s an attempt to reconnect the Labour Party with the very people it was set up to protect and represent. And to devise modern and imaginative policies so that this reconnection might be best achieved.’ — Rod Liddle, Associate Editor, Spectator

‘In calling for a post-liberal politics of the left, Blue Labour advocates have put themselves in a very mixed company. Watching them seek out a virtuous path through the ambiguous legacies of nation, religion, family and other conservative themes is both fascinating and instructive, challenging the presuppositions of any reader.’ — Colin Crouch, FBA, Emeritus Professor of Governance and Public Management, University of Warwick