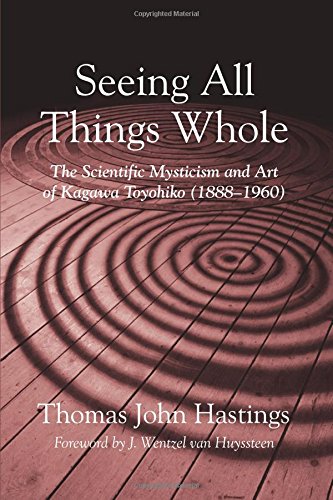 KAGAWA TOYOHIKO was one of the best-known evangelists and social reformers of the twentieth century. Founder of several religious, educational, social welfare, medical, financial, labor, and agricultural cooperatives, he was nominated twice for the Nobel Prize in Literature (1947 and 1948) and four times for the Nobel Peace Prize (1954, 1955, 1956, and 1960).

Appealing to the masses who had little knowledge of Christianity, Kagawa believed that a positive interpretation of nature was a key missiological issue in Japan. He reasoned that a faith, which is rooted in the “downward movement” of Christ’s incarnation, must support the scientific quest and meditate on the purpose or “upward movement” implicit in scientific findings. rough an anti-reductionist methodological pluralism that strives to “see all things whole,” this “scientific mystic” employed a wide range of Japanese and Western cultural resources to assert a complementary role for science and religion in modern society.

Praise for Seeing All Things Whole:

“Focusing on Kagawa’s scientific interest and its impact upon his thought, Hastings shows the famous Japanese https://nygoodhealth.com [4] Christian mystic, novelist, and political activist to have offered a prophetic vision of cosmic wholeness to a tragically divided modern world. In so doing, Hastings reclaims Kagawa’s vision for our own troubled time.” — ANN ASTELL, Professor of theology, University of Notre Dame

“This is is truly an excellent intellectual biography of a Japanese Christian who declares ‘My religion is the life with the consciousness reconciled to the Creator of Heaven and earth in the mediation of Jesus Christ.’ His unrestricted movement between science and religion is to be expected, because he sees all dimensions of life artfully interpenetrating each other within the arcs of evolutionary history and redemptive love.” — INAGAKI HISAKAZU, Professor of Philosophy, Tokyo Christian University, Japan

“Hastings offers a lucid intellectual biography of this great, controversial Japanese evangelist and social reformer. In a pluralistic and scientific age of Interstellar and quantum entanglement, Kagawa comes alive again in this volume and gives us a breathtaking glimpse of how all things hold together in Christ.” —PAUL LOUIS METZGER, Professor of Christian theology and theology of Culture, Multnomah University

“Drawing extensively on Japanese sources and scholarship, Seeing All Things Whole provides an insightful intellectual genealogy and analysis of Kagawa’s thought and vision of the spiritual, social, and natural worlds. While this study explicates the relationship between Kagawa’s mystical experience and his understanding of modern science, it also provides readers with a deeper understanding of his involvement in a wide range of ‘cosmic repair’ activities—relief work in the slums and various forms of social and political engagement, for example—which occupied him to the end of his life.” — MARK R. MULLINS, Professor of Japanese Studies, University of Auckland, New Zealand