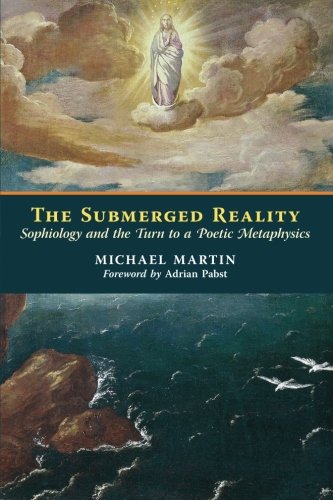 Now available from Angelico Press [1]: The Submerged Reality: Sophiology and the Turn to a Poetic Metaphysics, by Michael Martin, with a foreword by Adrian Pabst (Angelico Press [1]; Published 10 February 2015; 246pp+).

In The Submerged Reality, Michael Martin challenges us to reimagine theology, philosophy, and poetics through the lens of sophiology. Sophiology, as this book shows, is not a rogue theology, but a way of perceiving that which shines through the cosmos: a way that can return metaphysics to postmodern thought and facilitate a (re)union of religion, science, and art.

“This is a brave, powerful, and intensely fascinating book that will certainly prove controversial. The notion of the divine Wisdom, Sophia, has always proved contentious in theology, but has remained persistent. For Michael Martin, it is essentially a poetic intuition, challenging our ways of perception and understanding. Exploring writers left in the shadows by conventional theology, he taps sources from which theology and the life of the Church could find renewal.” —?ANDREW LOUTH, author of The Origins of the Christian Mystical Tradition andIntroducing Eastern Orthodox Theology

“In The Submerged Reality, Michael Martin suggests why a radicalized orthodoxy in the future will need more to ‘walk on the wild side’ and appropriate what is best in the esoteric, occult, and even gnostic traditions. He intimates that the past failure to do this is linked to a one-sidedly masculine theology, downgrading the sacrality of life, immanence, fertility, and the ‘active receptivity’ of the feminine. The consequence of this has been the perverse liberal attempt to distill ‘order out of disorder,’ or the denial of real essences, relations, gender difference, and the objective existence of all things as beautiful. Finally, Martin argues that such a genuinely feminist theology would also be concerned with a space between the openly empirical observation of nature on the one hand, and the reflective exposition of divine historical revelation on the other. In this space, continuously new poetic realities are shaped and emerge under the guidance of holy inspiring wisdom.” —?JOHN MILBANK, author of Theology and Social Theory and Beyond Secular Order

“This is a very clearly written and lively work of Catholic apologetics. Professors would be well advised to assign it as a text for undergraduate courses in theology. The Submerged Reality could win the hearts and minds of contemporary young people for Christian belief.” —?FRANCESCA ARAN MURPHY, Professor of Theology, University of Notre Dame

“Sophiology as participatory metaphysics shows us how Christian thought has not always been sufficiently Trinitarian and personalist, and how Christianity gradually split into multiple denominational chapels as a result. It further shows how the modern division between faith and reason must be supplemented by symbolic and eschatological thinking, and how thought centered on the Wisdom of God allows us to find new ways of dialogue between the monotheistic and cosmocentric spheres of human civilization. It is the great merit of Michael Martin’s work to open our eyes to such awareness. This is a very daring book, written with great erudition, and one that delivers the best of Christian thought, both East and West, in modern times.” —?ANTOINE ARJAKOVSKY, Research Director, Collège des Bernardins, Paris

“Sophiology is best understood, not as a ‘doctrine,’ but as a way of seeing and feeling the deepest mystery of reality. In this wide-ranging and exhilarating book, Michael Martin gives us the most important theological apologia for the contemplation of divine Sophia since the great Russian Sophiologists of the last century. Drawing on the Russian genius of Vladimir Soloviev and Sergius Bulgakov, Martin’s meditation on Sophia ranges across the contributions of figures such as Jacob Boehme and Rudolf Steiner, Edith Stein and Pavel Florensky, Hans Urs von Balthasar and John Milbank. In so doing, he weaves a rich tapestry that illumines how a deeper gaze toward the feminine figure of Sophia begins to yield a more adequate response to the crisis of post-modern secular culture.” —?AARON RICHES, Instituto de Teología Lumen Gentium / Instituto de Filosofía Edith Stein, Granada, Spain