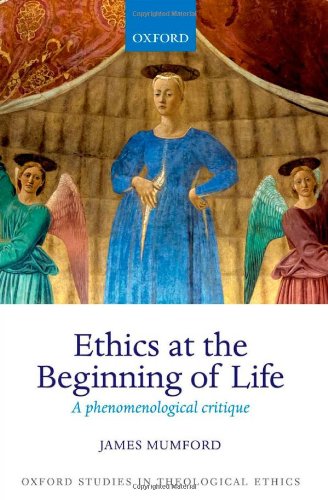 Many of the most controversial moral decisions we face hinge upon competing descriptions of life, and never is this truer than at the beginning of life. James Mumford draws upon phenomenology (a branch of continental philosophy) to question the descriptive adequacy, the essential “purchase upon reality,” of many of the approaches, attitudes and arguments which make up beginning of life ethics today. He argues that many of the most prevalent positions and practices in our late modern culture have simply failed to take into account the reality of human emergence, the particular way that new members of our species first appear in the world.

Historically, phenomenologists have been far more interested in death than in birth. Mumford therefore first develops his own phenomenological investigation of human emergence, taking leads and developing approaches from phenomenologists both French and German, both living and dead. In the second half of the book phenomenology is finally applied to ethics, and acute moral questions are divided into two kinds: first those concerning “what” it is that we are dealing; and, secondly, the more contextual “where” questions relating to the situation in which the subject is found.

Finally, although this book primarily constitutes a philosophical rather than a religious critique of contemporary ethics, with the findings from continental philosophy being brought to bear upon core convictions of English-speaking ‘liberal’ moral and political philosophers, Mumford concludes by exploring an alternative theological basis for human rights which might fill the vacuum created.

‘A deeply sophisticated argument about the character of our relation with unborn and newborn human beings. It challenges the models that have been allowed uncritical domination in a lot of recent ethical argument; and, without emotive pleading or overheated polemic, it insists that we look afresh at assumptions around abortion and the status of the unborn person, on the grounds of solid philosophical discussion as well as offering a rich and resourceful theological context for such a new look at the issues. This is a seriously impressive work.’ —Rowan Williams

‘Skilful and original, a creative description of what Mumford calls the extraordinary encounter of the newone. This is a contribution both to moral philosophy and to phenomenology, a rare achievement. Mumford is a scholar equally at ease in the British and Continental tradition, he opens his readers eyes to many a fact which his predecessors have left unnoticed. The book is also the work of a good stylistreading it is sheer pleasure.’ —Jean Yves Lacoste