[1]Diagonal Advance: Perfection in Christian Theology, by Anthony D. Baker is now out through SCM Press in the Veritas [2] series. [Purchase UK [3] | Purchase US [4]]

Diagonal Advance argues for a radical revision of Christian thinking about the purpose of human life. Perfection is neither a vertical drop from the divine, nor a horizontal progression through social and personal development. Rather, it is a diagonal advance into the divine perfections through the perfecting of material culture. This vision is, the author argues, in line with the account of human ends that emerges from the Greek and Hebrew background, in the New Testament and in the classical Christian era. When the late medieval and early modern writers of theology and literature begin to name the problem differently, the classical vision is distorted, so that human perfecting and the divine perfections have little to do with one another. Through a critical engagement with contemporary texts, concluding with a dramatic revision of the Prometheus mythology, the author argues for a renewed diagonalizing of Christian perfection.

‘I am a Methodist which means I have never trusted the language of perfection. So I am in Anthony Baker’s debt for reclaiming the notion of perfection. This is a wonderful book that is not only sound scholarship but is morally profound.’ —Stanley Hauerwas

‘Perfection is a crucial theme in the New Testament which lurks in much patristic thinking and was first foregrounded by the Wesley brothers. Within their tradition, and yet transcending it, Tony Baker provides us with the most sophisticated theological treatment of this topic to date – ranging over the Bible, Philosophy, Literature and Cultural History with a distinctive elan. He shows in particular how the loss of the metaphysics of participation was equally a loss of a sense of our relationship with God as a progress in perfection which was as much vertical as it was horizontal. This book is as close to perfection as one could hope for.’ —Catherine Pickstock, University of Cambridge

‘Is this a book or a symphony? Both. Does it concern theology or human existence? Both. In four movements, this book traces the emergence and deformations of the concept of perfection. Is perfection the plenitude of finite existence? The never-satisfied desire for the infinite? The imitation of God? Divinisation? Movement in repose? Without an empty nostalgia, A. Baker offers a critical history of Christian representations of perfection. He shows how the oppositions between nature and supernature, between the Bible and Hellenism, have been surmounted, but also how they have given place to a still provisional synthesis. He covers diverse “styles”–of concepts, which are also forms of life. He even offers his own style, in opposing the “distortions” to a more sound concept of perfection. A book immense with regard to stakes, dense with regard to the current mobilised culture. A book of supple and full construction, which will reward both the patient and the impatient.’ —Olivier Boulnois, Directeur d’Etudes, Ecole Pratique des Hautes Etudes

And coming soon in the Interventions [5] series through Eerdmans are the following two publications: 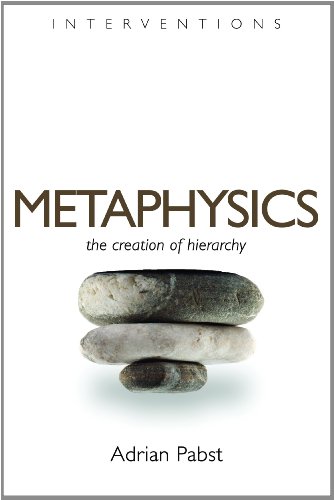 Metaphysics: The Creation of Hierarchy, by Adrian Pabst, with a foreword by John Milbank. [Pre-order UK [6] | Pre-order US]

This comprehensive and detailed study of individuation reveals the theological nature of metaphysics. Adrian Pabst argues that ancient and modern conceptions of “being” — or individual substance — fail to account for the ontological relations that bind beings to each other and to God, their source. On the basis of a genealogical account of rival theories of creation and individuation from Plato to ‘postmodernism,’ Pabst proposes that the Christian Neo-Platonic fusion of biblical revelation with Greco-Roman philosophy fulfills and surpasses all other ontologies and conceptions of individuality.

“This book does nothing less than to set new standards in combining philosophical with political theology. Pabst’s argument about rationality has the potential to change debates in philosophy, politics, and religion.” (from the foreword) 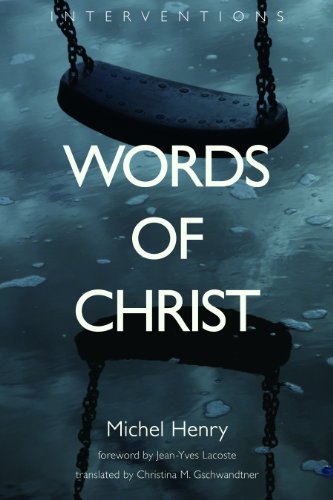 Words of Christ, by Michel Henry, translated by Christina M. Gschwandtner, with a foreword by Jean-Yves Lacoste and an introduction by Karl Hefty. [Pre-Order UK [7] | Pre-Order US [8]]

In Words of Christ Michel Henry, an important French philosopher, asks how Christ can be both human and divine. Also, how can we as humans experience Christ’s humanity and divinity through his words? Are we able to recognize certain experiences or words as divine? How do divine words differ from human words? Henry approaches these questions from the angle of material phenomenology — the study of reality as we experience it. Startling possibilities — and further questions — emerge as Henry systematically explores these enigmas. For example, do divine phenomena possess their own kind of phenomenality, and do we have access to this other realm? Henry’s perspective on Christ’s words — here translated into English for the first time — is highly original and interdisciplinary in nature, in keeping with other volumes of the Interventions series. This was Henry’s last published work before his death in 2002.