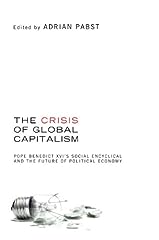 This collection of essays outlines a new political economy. Twenty years after the demise of Soviet communism, the global recession into which free-market capitalism has plunged the world economy provides a unique opportunity to chart an alternative path. Both the left-wing adulation of centralized statism and the right-wing fetishization of market liberalism are part of a secular logic that is collapsing under the weight of its own inner contradictions. It is surely no coincidence that the crisis of global capitalism occurs at the same time as the crisis of secular modernity.

Building on the tradition of Catholic social teaching since the groundbreaking encyclical Rerum Novarum (1891), Pope Benedict XVI’s Caritas in Veritate is the most radical intervention in contemporary debates on the future of economics, politics, and society. Benedict outlines a Catholic “third way” that combines strict limits on state and market power with a civil economy centered on mutualist businesses, cooperatives, credit unions, and other reciprocal arrangements. His call for a civil economy also represents a radical “middle” position between an exclusively religious and a strictly secular perspective. Thus, Benedict’s vision for an alternative political economy resonates with people of all faiths and none.

PART I: Christianity and Capitalism

1 A Real Third Way, John Milbank
2 A Tale of a Duck-Billed Platypus Called Benedict and His Gold and Red Crayons, Tracey Rowland

3 “We Communists of the Old School”, Eugene McCarraher
4 Beyond the Culture of Cutthroat Competition, Mark and Louise Zwick

5 Fraternity, Gift, and Reciprocity in Caritas in Veritate, Stefano Zamagni
6 The Paradoxical Nature of the Good, Adrian Pabst

“The current economic crisis is in fact a deeper crisis of cultural imagination and civilizational ethics. This collection of bold and provocative readings of Caritas in Veritate displays an intellectual verve unafraid to think beyond the fragmentations of modernity. By fully exploring the ontology of communion and gift, I believe this collection bears witness to the kind of daring discourse Pope Benedict XVI wanted to ignite. What is more, I believe the essays exemplify the kind of fruitful dialogue needed, not only for an adequate response to the crisis of Western civilization, but also to realize an economy that would facilitate the flourishing of the human heart. Adrian Pabst is to be commended for realizing this collection of excellent essays.”
-Javier Martínez Fernández, Archbishop of Granada

“Anyone interested in finding a ‘third way’ between today’s barely regulated capitalism and state socialism will find much to reward them in this collection. It goes beyond the rigid limitations of contemporary liberal thinking in order to explore some of the crucial resources, intellectual and cultural, that we need to devise a new politics of the Left.”
-Charles Taylor, author of A Secular Age

“Caritas in Veritate is the first papal encyclical that addresses issues immediately relevant for economic and social theory. It also embodies challenges that concern directly the academic community of economists, in particular the nature and scope of the firm, the market and profit. The reading of this important book is the best way for engaging with these themes and discovering the significance of Caritas in Veritate in the present theoretical debate.”
-Luigino Bruni, co-author of Civil Economy

“This collection of essays addresses a key challenge for anyone trying to think clearly about economics: how to dig out from under the intellectual rubble created by the failure of conventional economic theories. The proposed answers vary but there is a common and welcome effort to think philosophically, about both the foundations of the economic order and the detailed and failed arrangements of finance. Particularly serious attention is paid to the great challenge posed by Pope Benedict XVI-to integrate ‘quotas of gratuitousness and communion’ into economic activity. This book’s breadth of views and the depth of analysis make it a rewarding read for anyone trying to understand and improve the modern industrial economy.”
-Edward Hadas, author of Human Goods, Economic Evils

“This book provides a compelling intellectual engagement with the vision of an alternative civil economy proposed in Caritas in Veritate. The diverse essays collected in this book marshal Anglican and Roman Catholic social thought in service of a bold account of a progressive moral economy rooted in a transcendent common good. It will be essential reading for those interested in the increasingly cogent argument that religious reason is an indispensable resource for the remoralizing of economic life.”
-Anna Rowlands, co-editor of Pathways to the Public Square