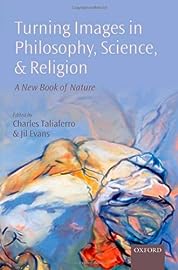 [1]The following volume has just been released: Turning Images in Philosophy, Science, and Religion: A New Book of Nature [1], eds. Charles Taliaferro and Jil Evans (Oxford Univerity Press, 2011). [UK [1] | US [2]]

Turning Images in Philosophy, Science, and Religion: A New Book of Nature brings together new essays addressing the role of images and imagination recruited in the perennial debates surrounding nature, mind, and God. The debate between “new atheists” and religious apologists today is often hostile. This book sets a new tone by locating the debate between theism and naturalism (most “new atheists” are self-described “naturalists”) in the broader context of reflection on imagination and aesthetics. The eleven essays will be of interest to anyone who is fascinated by the power of imagination and the role of aesthetics in deciding between worldviews or philosophies of nature. Representing a variety of points of view, authors include outstanding philosophers of religion and of science, a distinguished art historian, and a visual artist. The book begins with Martin Kemp’s essay on the work of the biologist, mathematician and classical scholar D’Arcy Wentworth Thompson in which Kemp develops the idea of “structural intuitions and a critique of reductive thinking about the natural world. This is followed by Geoffrey Gorham’s overview and analysis of images of nature and God found in early modern science and philosophy. Anthony O’Hear questions a reductive, naturalist account of the origin of mind and values. Dale Jacquette offers a thoroughgoing naturalistic philosophy of the emergence of intentionality and a unique argument about the emergence of art and the aesthetic appreciation of nature. E.J. Lowe brings to light some challenges facing naturalistic approaches to human imaginative sensibility. Douglas Hedley articulates and defends a cognitive account of imagination, highlighting some of the difficulties confronting naturalism. Daniel N. Robinson offers a sweeping treatment of nature and naturalism, historically engaging Aristotle, Kant, Hegel and others. Conor Cunningham provides an aggressive critique of contemporary naturalism. Gordon Graham investigates the resources of naturalism in accounting for our sense of the sacred. Mark Wynn provides a subtle understanding of imagination and perception, suggesting how these may play into the theism – naturalism debate. The book concludes with Jil Evans’ reflections on how images of the Galapagos Islands have been employed philosophically to picture either a naturalist or theistic image of nature.