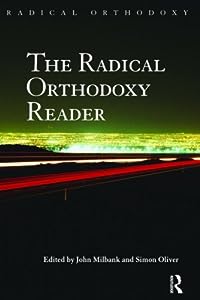 [1]Released in April is the Radical Orthodoxy Reader [1], edited by John Milbank [2] and Simon Oliver [3].

The Radical Orthodoxy Reader [1] presents a selection of key readings in the field of Radical Orthodoxy, the most influential theological movement in contemporary academic theology. Radical Orthodoxy draws on pre-Enlightenment theology and philosophy to engage critically with the assumption and priorities of secularism, modernity, postmodernity and associated theologies. In doing so it explores a wide and exciting range of issues: music, language, society, the body, the city, power, motion, space, time, personhood, sex and gender. As such it is both controversial and extremely stimulating; provoking much fruitful debate amongst contemporary theologians.

To assist those encountering Radical Orthodoxy for the first time, each section has an introductory commentary, related reading and helpful questions to encourage in-depth understanding and further study.