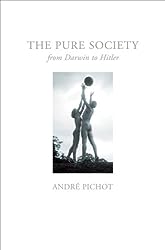 [1]The Pure Society: From Darwin to Hitler [1], by André Pichot, translated by David Fernbach

As genetic manipulation comes to dominate medical science, a timely and trenchant history of eugenics

How did the notions of “race” and “ethnic group,” under the cover of scientific legitimacy, get used for political ends? This work retraces the history of biological conceptions of society and their racist and eugenicist applications from the end of the nineteenth century to the post-Second World War epoch. André Pichot analyzes the relationship between science, politics and ideology, through the examination of specific cases: from Nazism to the various eugenicist research programs launched or financed by eminent scientific organizations from the beginning of the twentieth century onwards. And, today, with the mapping of the human genome and rapid advances in gene therapies, he warns that the dream of a “pure society” is in danger of resurrection.

[4]Atheism in Christianity [4], by Ernst Bloch, with an introduction by Peter Thompson

From the publisher: “On 6th July, Verso is publishing Ernst Bloch’s long unavailable Atheism in Christianity [4] in which one of the most important German Marxist thinkers of the twentieth century, and one of the great theorists of utopia, offers a nuanced and close perspective on faith and society.”

In recent years religious faith has come under much scrutiny from secular progressives. Fear of a rise in Islamic and Christian fundamentalism has prompted numerous attacks on the belief in God which make no attempt to understand its source.

In the long unavailable Atheism in Christianity, Ernst Bloch provides an original historical examination of Christianity in an attempt to find its social roots. He pursues a detailed study of the Bible and its long standing fascination for “ordinary and unimportant” people. In the Bible stories’ promise of utopia and their antagonism to authority, Bloch locates the appeal to the oppressed–the desire “to transcend without transcendence.” Through a lyrical yet close and nuanced analysis he explores the tensions within the text that promote atheism, against the authoritarian metaphysical theism imposed on it by priest interpreters. At the Bible is heart he finds a heretical core and claims, paradoxically, that a good Christian must necessarily be an atheist.

“Ernst Bloch is the one mainly responsible for restoring honour to the word ‘utopia’.” — Theodor Adorno

“Bloch is not so much a Marxist philosopher … as he is rather a ‘theologian of the revolution’.” — Fredric Jameson

[5]Atheist Delusions: The Christian Revolution and Its Fashionable Enemies [5], by David Bentley Hart

From the publisher’s description [6]:

Currently it is fashionable to be devoutly undevout. Religion’s most passionate antagonists—Christopher Hitchens, Richard Dawkins, Daniel Dennett, Sam Harris, and others—have publishers competing eagerly to market their various denunciations of religion, monotheism, Christianity, and Roman Catholicism. But contemporary antireligious polemics are based not only upon profound conceptual confusions but upon facile simplifications of history or even outright historical ignorance: so contends David Bentley Hart in this bold correction of the distortions. One of the most brilliant scholars of religion of our time, Hart provides a powerful antidote to the New Atheists’ misrepresentations of the Christian past, bringing into focus the truth about the most radical revolution in Western history.

Hart outlines how Christianity transformed the ancient world in ways we may have forgotten: bringing liberation from fatalism, conferring great dignity on human beings, subverting the cruelest aspects of pagan society, and elevating charity above all virtues. He then argues that what we term the “Age of Reason” was in fact the beginning of the eclipse of reason’s authority as a cultural value. Hart closes the book in the present, delineating the ominous consequences of the decline of Christendom in a culture that is built upon its moral and spiritual values.

“Provoked by and responding to the standard-bearers of ‘the New Atheism’, this original and intellectually impressive work deftly demolishes their mythical account of ‘the rise of modernity.’ Hart argues instead that the genuinely humane values of modernity have their historic roots in Christianity.”—Geoffrey Wainwright, Duke Divinity School

“In this learned, provocative, and sophisticated book, Hart presents a frontal challenge to today’s myopic caricature of the culture and religion that existed in previous centuries.”—Robert Louis Wilken, University of Virginia

[8]Reason, Faith, and Revolution: Reflections on the God Debate [8], by Terry Eagleton

From the publisher’s description:

Terry Eagleton’s witty and polemical Reason, Faith, and Revolution [8] is bound to cause a stir among scientists, theologians, people of faith and people of no faith, as well as general readers eager to understand the God Debate. On the one hand, Eagleton demolishes what he calls the “superstitious” view of God held by most atheists and agnostics and offers in its place a revolutionary account of the Christian Gospel On the other hand, he launches a stinging assault on the betrayal of this revolution by institutional Christianity.

There is little joy here, then, either for the anti-God brigade—Richard Dawkins and Christopher Hitchens in particular—nor for many conventional believers. Instead, Eagleton offers his own vibrant account of religion and politics in a book that ranges from the Holy Spirit to the recent history of the Middle East, from Thomas Aquinas to the Twin Towers.

“This is sure to ruffle feathers on both sides of the God debate. Eagleton offers his own polemical chronicle of religion and politics from the Holy Spirit to the Twin Towers. Many will, simply, have to read this.”—Bookseller, 23rd January 2009

“Eagleton is that rarity, a non-ideological Marxist with a keen understanding of and sympathy for the human condition, not to mention an informed as well as sharp sense of humor. Serious Christians may be his most appreciative readers.”—Booklist (starred review)